We reach out to you just once a year to ask for your support. And even now, we seek your help not for our regular research and reporting work, which catalyzes change by documenting the hidden world of prison isolation. Instead, we ask you to donate to a special program that brings small ray of light into the lives of thousands of people languishing in the darkness of solitary confinement. It’s a program we call Lifelines to Solitary. 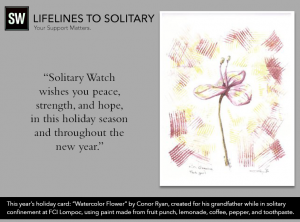 The program began, in the early days of Solitary Watch, with occasional newsletters to anyone in solitary confinement with whom we were lucky enough to connect. It rapidly became a treasured stream of news from the free world—a reliable and, for far too many, the only lifeline available to remind them that they had not been forgotten by the society to which they once belonged. We soon added holiday cards, and all the individual letters and cards we ourselves could find time to write.

As our list of people in solitary grew to nearly 5,000, we realized that quarterly newsletters and holiday cards were not enough. Knowing that a single letter can make a staggering difference in the life of someone suffering in solitary, we have expanded our Lifelines to Solitary to include a Letters project, the first pen pal program designed specifically for people living in extreme isolation.

In the past two years, in partnership with the National Religious Campaign Against Torture, we’ve helped connect faith communities and student groups groups with our contacts in solitary, and learned how profoundly two lives can be changed with a single stamp. In 2016 we also added a program for individuals, offering everyone an opportunity to forge a correspondence built on belief in the humanity we all share.

Every day, now, we receive requests for newsletters and pen pals from men, women, and children living in solitary around the country. Because we know what an ounce of human contact can mean for these isolated souls, we struggle to keep up with the demand. But our funding for Lifelines comes almost entirely from individual donors like you.

That is why we are asking you today to make a donation to Lifelines to Solitary. Please take a look at our appeal by clicking on the link below, and consider lending your support.

With sincere thanks for your caring and generosity, and with best wishes for the new year,

What Will It Take to End Solitary Confinement?

by Events and Announcements