It has been over three years since the first statewide hunger strike in protest of the California prison systems’ use of solitary confinement. The hunger strike, the first of many to follow, was launched by individuals housed in the state’s Security Housing Units (SHUs). The hunger strikes prompted state Legislative hearings, international scrutiny, and some reforms.

The SHU, first established in 1989 at Pelican Bay State Prison, was designed to house the “worst-of-the-worst” in close, secure, isolated confinement. Keeping individuals in small, windowless cells for 22 1/2 to 24 hours a day eventually proved to be a convenient solution to deal with individuals exhibiting behavioral or mental health problems and real or suspected gang affiliation as well.

The SHU, once limited to Pelican Bay, has been expanded to a total of four male facilities and one female facility. Despite this expansion, California doesn’t have enough room in the SHUs for all the individuals prison officials would like to place in them, necessitating their placement in Administrative Segregation Units (ASUs), which are dispersed throughout each prison.

In June 2011, individuals in the Pelican Bay SHU coordinated a hunger strike in protest of long-term isolation. The hunger strike lasted three weeks, notably bringing together people of all racial groups. There would be an additional hunger strike that year, followed by a third, 60-day-long hunger strike in July 2013.

Partly in response to the hunger strikes, the California Department of Corrections and Rehabilitation (CDCR) proposed and implemented an array of reforms purportedly aimed at tightening the standards for SHU placement and potentially reducing the number of individuals held in highly restrictive custody.

Beginning in October 2012, the CDCR has changed the criteria used to place individuals in the SHU, created a “Step Down Program” for individuals to transition out of the SHU, and began a process of case-by-case reviews of all individuals held in the SHU and ASU to determined the appropriateness of their placement.

The reviews are ongoing, but the data collected so far is quite revealing.

According to data obtained from CDCR, 725 SHU case reviews have been conducted, with about 69%  those cases leading to release to the final step in the Step Down Program and/or a General Population setting. A further 63% of ASU case reviews have led to a return to the general population.

In other words, in most cases, it appears that under slightly stricter standards, CDCR could not justify keeping individuals in highly restrictive, isolating conditions.

With these reviews being conducted for over two years now, and the overall decline of the prison population, one would expect that the number of people in restrictive housing would be on the decline.

Presented first is a comparison of the reported single-cell population per institution in October 2012 and October 2014. 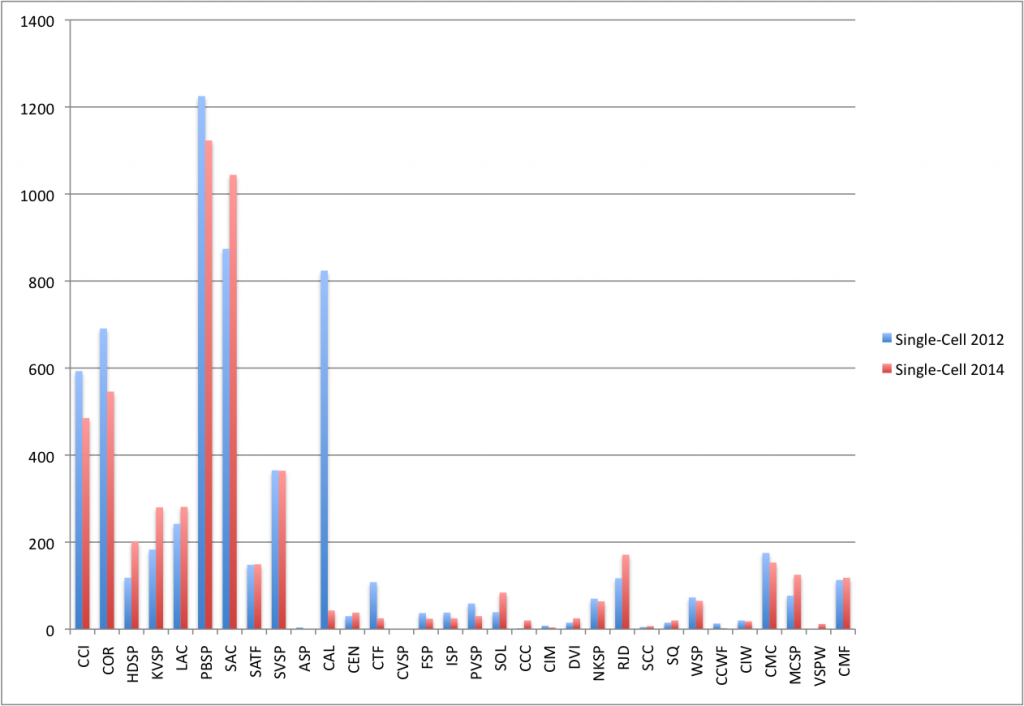 The SHU is used to house people deemed security threats over the long-term. Given the outcomes of the case-by-case reviews, a reduction in the SHU population has occurred since 2012. 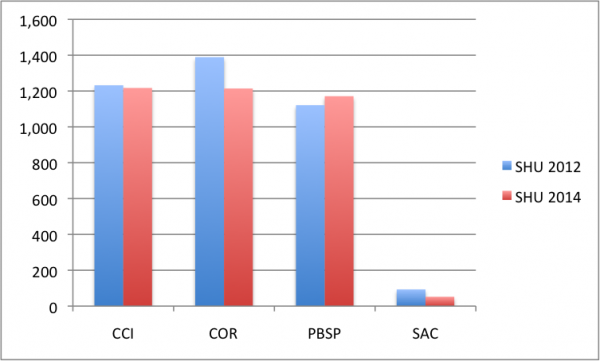 SHU Populations In October 2012 and October 2014 reported through COMPSTAT.

It is important to note that those removed from single-cell status might well still be locked down 22 to 24 hours a day–but in cells with one or more other people.

Aside from the SHU, the ASU also serves to isolate individuals in the California prison system, though generally for shorter periods of time than the SHU. There is no typical term in the ASU, which can range from hours to years. Unlike the SHU, the ASU is not designed to be long-term housing. 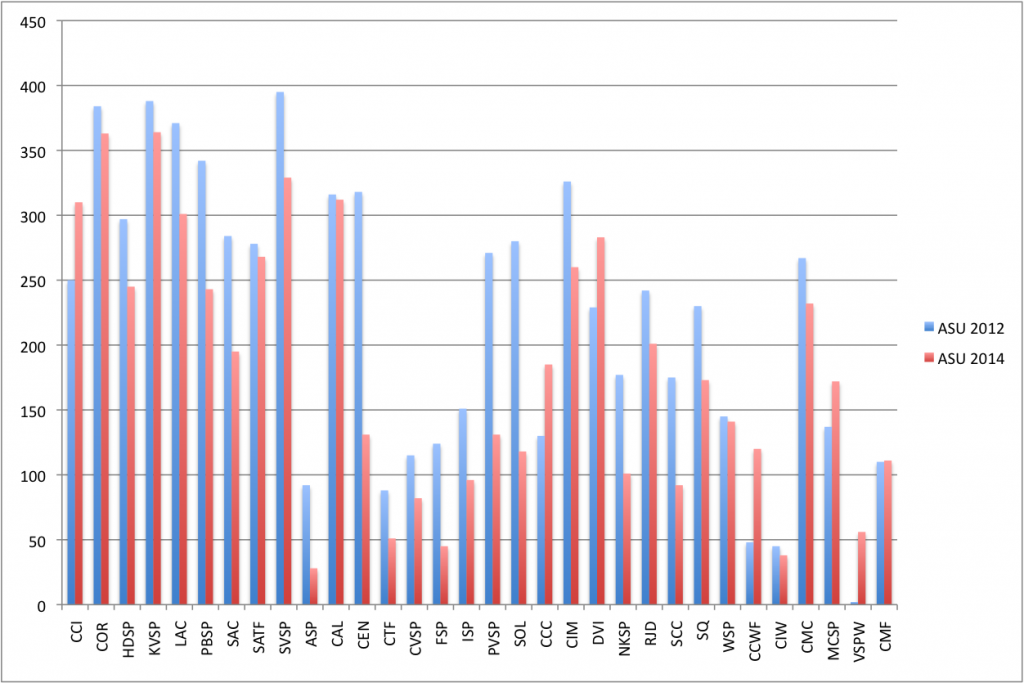 ASU Population as reported through COMPSTAT in October 2012 and October 2014.

Overall, the total number of individuals in the ASU declined significantly between 2012 and 2014. 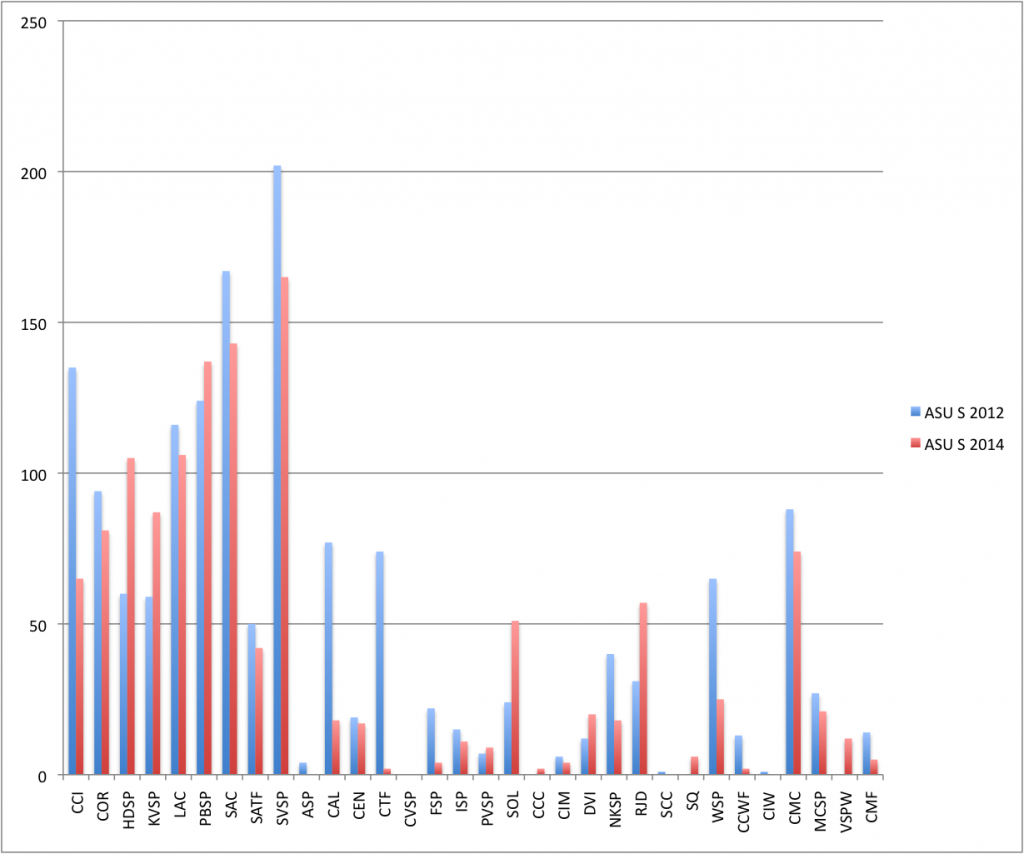 ASU single-cell population reported through COMPSTAT for October 2012 and October 2014.

The fluctuations in single-cell status across institutions are as of yet unexplained.

Unlike what is available for the SHU, CDCR makes available through COMPSTAT the average terms in the ASU per institution. ASUs are not designed for long-term housing and do not typically come with any significant form of programming. While in theory individuals shouldn’t spend very much time the ASU, COMPSTAT data consistently shows long-terms in the ASU. 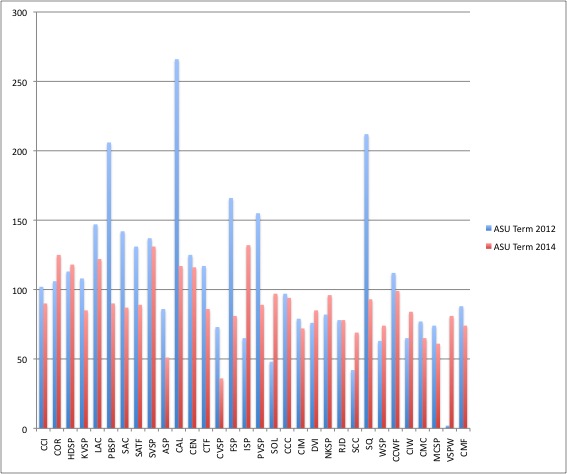 Breakdown of the average lengths of stay in ASUs prisons reported in October 2012 and October 2014.

As seen in the above chart, lengths of stay in the ASU vary across prisons and time.

It appears that the total use of single-cell housing is on the decline. Further, total use of SHU and ASUs in both raw numbers and as a percentage of the prison population have declined. In the SHU, there has been a slight decline in the use of single-cell housing, though a slight increase in the SHU population at Pelican Bay State Prison. In the ASU, the percentage of individuals in the ASU on single-cell status has slightly increased, though there have been significant declines in terms of stay in the ASU.

There are a few potential explanations for the decline in single-cell placement and the use of segregation units. First, the case-by-case SHU and ASU reviews that have been occurring have undoubtedly contributed to the decline of segregation populations. As a result of those reviews, hundreds of individuals have been transferred out of the SHU and ASU and placed in general population. Second, there ought to have been reductions in the total single-cell population in part due to court-ordered reforms pertaining to the segregating of individuals receiving mental health treatment. Thirdly, it is possible that some individuals in segregation units have benefited in recent years from prison population reductions.

Thus far, for advocates of reducing the use of solitary confinement, there is cause for cautious optimism within the data. At the same time, there is much more that can be done.

One thought on “In California Prisons, Hundreds Removed from Solitary Confinement—and Thousands Remain”