Devices of Torture in U.S. Prisons

Editors’ note: As coordinator of the American Friends Service Committee’s Prison Watch Project, Bonnie Kerness is a leading voice for humanitarian reform of U.S. prisons, jails, and detention centers. Kerness is also a pioneer in raising awareness about the use of prolonged solitary confinement, and in uncompromisingly identifying the practice as a form of torture. Since the 1990s, she has coordinated AFSC’s STOPMAX Campaign, which “works to eliminate the use of isolation and segregation in U.S. prisons” through “research, grassroots organizing, public education and policy advocacy.”

This guest post is based on a speech Kerness gave at the November 2009 meeting of the National Religious Campaign Against Torture. NRCAT, which has long worked to end the torture of post-9/11 detainees at Guantanamo and elsewhere, recently expanded its mission to “address the use of torture in U.S. prisons, with particular emphasis on the widespread use of long-term isolation.”  NRCAT’s decision acknowledges the connection between abuses of prisoners’ human rights at home and abroad. As Kerness states: “What is going on in U.S. prisons is a profound spiritual crisis that legitimizes torture.”

“How do you describe desperation to someone who is not desperate”? began a letter to me from Ojore Lutalo who went on to depict everyone in the Management Control Unit at Trenton State Prison being awakened by guards dressed in riot gear holding barking, salivating dogs at 1 a.m. every other morning. Once awakened, the prisoners were forced to strip, gather their belongings while feeling the dogs straining at their leashes snapping at their private parts as they are trained to do. He described being terrorized, intimidated, and the humiliation of being naked and not knowing whether the masked guards were male or female.

This went on for an entire summer, until activists inside and out were able to stop this senseless torture. If we think back to slavery and to images of the civil rights movement we can begin to understand that dogs have been used as a device of torture for hundreds of years in the US. When what happened at Abu Ghraib shocked the world, more than 2 and a half million prisoners, their families, advocates, lawyers and activists understood that this was business as usual.

The proportion of complaints coming from women has risen, with women describing conditions of confinement, which can be classified as torture. They suffer from sexual abuse by staff, with one woman saying, “I am tired of being gynaecologically examined every time I’m searched.” Another put it, “That was not part of my sentence, to…perform oral sex with officers.” Women have reported the inappropriate use of restraints on pregnant and sick prisoners, including one woman whose baby was coming at the same time the guard who had shackled her legs was on a break somewhere else in the hospital.

We have received reports about a woman who died of pancreatic disease that went undiagnosed, about a mentally ill woman who was confined naked in a filthy cell where she ingested her own bodily waste, about a woman who suffered burns over 54% of her body and gradually lost mobility when she was denied the special bandages which would keep her skin from tightening, and from a woman who unsuccessfully begged staff for months to allow her to see a doctor. This particular woman was finally diagnosed with cancer, in enormous pain, with no pain medication. She died nine months after the diagnosis.

I am reminded of mentally ill Frank Hunter in New Jersey, who was forced to into an isolation unit. The guards taunted and teased this man, made him dance as he begged them for cigarettes, water or food while they laughed. Frank Hunter killed himself. And I am reminded of the mentally ill California prisoner who had wiped his body in feces. The guards response to this was to put him in a bath so hot, it boiled 30% of the skin off his body. In this world of AIDS, I am also haunted by a description of a man being thrown into a cell which had a wet bloody doorknob, bloody walls and bloody floors from the previous occupant who had attempted suicide. He spent 6 hours standing afraid to touch a thing.

When I think about “devices of torture,” the testimonies of people in prison have widened my understanding that those devices can be anything. They can be sex, sadism, lack of sleep, lack of water, use of dogs, or withdrawal of any of those things necessary for human mental and physical health. The people in prison taught me that devices of torture are more than chemical or physical restraints. They taught me that psychological abuse is often the worst device of torture. 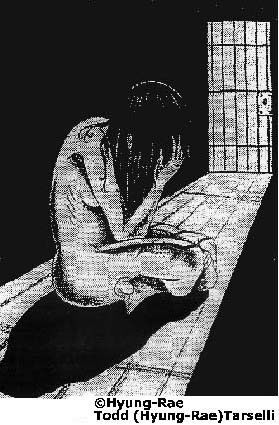 A couple of years ago, I began a dialogue with some young people in an AFSC youth group about their experiences in juvenile detention. One young woman said she was 12 when she went in. She said, “I saw them pepper spray this girl. They sprayed her directly in her mouth and she couldn’t breathe. We kept telling them that she had asthma, but they wouldn’t listen.”

Another went on to say that “they mace the boys regularly. If you fight, they jump on your back and mace you. They hit you with these long, black sticks. I still have the marks on my back. Because of the mace you can’t see anything and you don’t know who is hitting you or where they are coming from. They made us sleep naked.”

These past years have been full of thousands of calls and letters with complaints from people in prison and their families throughout the country describing cold, filth, extended isolation, racism, brutality and use of devices of torture. In New Jersey I’ve received reports of the use of something called the “chicken suit,” where the mentally ill are forced to wear clear yellow plastic suits during their stay in the Special Needs unit in a county facility. In essence they spend their days naked.

I have received vivid descriptions and drawings of four and five point restraints, restraint belts, restraint beds, stun grenades, stun guns, stun belts, spit hoods, black boxes. tethers, waist and leg chains. Some years back I was at a gathering where someone brought a black box attached to handcuffs and asked me to wear it for 45 minutes. The box was so heavy that the pain was immediate. I was unable to think of anything for those 45 minutes except pain. People have described wearing it for hours and in at least one prison, the person has to wear it during his entire window visit.

One letter from a social worker says, “John was forced to leave the strip cell and urine soaked pillow case was placed over his head like a hood. He was walked, shackled and hooded to a different cell where he was placed in a device called “the chair” where he was kept for over 30 hours, being forced to urinate and defecate on his own hands which were tucked under him.”

Another man says, “I was repeatedly a victim of the stun belt, waist and leg chains. They secured two additional chains around me placed on my neck and wrapped twice with the loose ends secured to my waist chains by small paddocks, I was then made to kneel down and a second chain was looped around my ankle chains and secured. All of this was done during court dates in holding areas. I hadn’t been convicted of anything. “When they first began using these tasers in U.S. prisons, the people in prison were quick to warn us that often what begins in prisons finds its way to being used outside of prisons.

One letter described the restraint “bed” as “a piece of board 3 feet wide and six feet long that is covered with towels. The prisoner is stripped and shackled spread eagle to the board. The board is then inclined from the wall. 3 times a day the guard comes in with cold chow and a bedpan. If you have to use the bathroom, you do it in the bedpan. You are not unshackled. They guard holds the bedpan under you!” Testimonies coming in to AFSC’s Prison Watch Project have described being kept in these restraints for days.

Reports on the use of stun devices have also risen with one man noting that he was forced to stand trial wearing a stun belt. He was told that if he spoke out he would “fry like a potato and shit and piss in my pants as I lost consciousness.” Another reports seeing an officer inadvertently setting off a stun belt causing the prisoner to fall from his chair, lose consciousness and shake uncontrollably on the floor.

One person who just got out told me of the guards in a federal facility throwing stun grenades into a unit where there was a disturbance. He said that he had been previously handcuffed and thrown to the floor, and that the grenade wedged under his back and then blew up. He said the grenade releases black pellets and causes concussions, injuries to ears, confusion and physical injury. He also noted that the cage doors were locked and there was no way for any of the men to escape the psychological panicked feeling of being trapped.

Another says, “for approximately 45 minutes guards threw stun grenades. Along with the stun grenades, thrown in by hand, staff placed the barrels of grenade launchers through the windows and shot canisters of tear gas into the unit. I remember seeing one prisoner get shot in the face with a canister of gas. The staff used an explosive device to open the doors and entered the unit in gas masks and in crews of three, beat and handcuffed every prisoner. After enduring all of this, I was then hit in the face with a baton that they call a ‘nigger beater.’”

The Department of Corrections is more than a set of institutions. It is also a state of mind. That state of mind led to Abu Ghraib and Guantanamo and conditions and practices U.S. prisons here and throughout the world. What is going on in U.S. prisons is a profound spiritual crisis that legitimizes torture, extended isolation often lasting decades and the use of devices of torture.

15 thoughts on “Devices of Torture in U.S. Prisons”